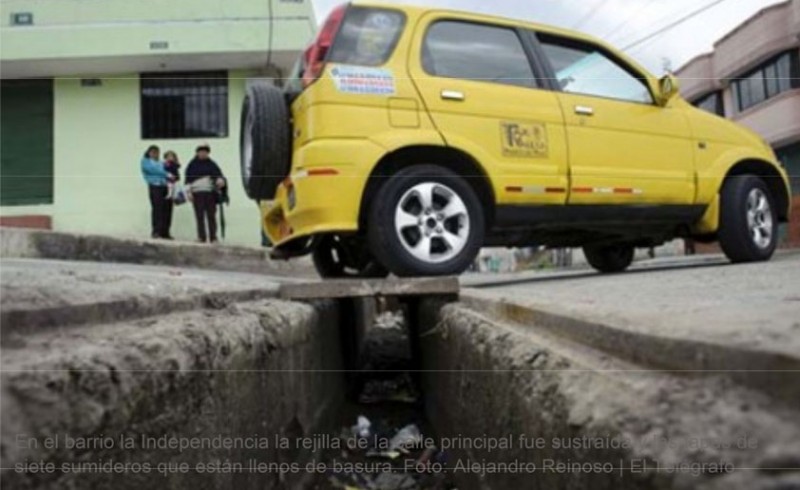 Theft of the covers and grids that are part of the sewer system, instead of stopping increases. The neighborhood Independencia, Beguinage, Ecuadorian, Guamaní in the south and Calderón, Carapungo, Carcelén Pisulí, La Roldós, La Mena del Hierro in the north are the critical points where they are frequently stolen. At the entrance to the Independence neighborhood, in the sector of the Ibarra citadel, the surprise for the residents was that the culvert of the main street, five meters long, woke up yesterday without grilles, which hinders mobility for vehicles and pedestrians , especially for the public transport buses that serve this area. Luis Humberto Cajamarca lives 66 years in this area. He confirms that the covers are removed and then sold at low cost. “You can not imagine the damage they do to the city when, for lack of lids, the sewers become dirty and damaged.” Gonzálo Cáceres, inhabitant of the sector of Carcelén, said that six culverts are missing at the entrance. He also mentioned that as a neighborhood organized several times have seen the need to file complaints, but we do not know who to do them. According to Leoncio Galarza, chief of operations of the Metropolitan Company of Drinking Water and Sanitation (Emaps), the work of repositioning of sewer covers are constant, but the complaints for this crime do not stop. In 2011, Emaps invested $ 280,000 in the replacement of sewer fittings. Thus, each month, 200 tapas are replaced due to theft or deterioration, giving a total of 1,400 per year. Each cap weighs an average of 85 kilos, so it takes several people to remove these materials. He added that a new cover costs 120 dollars and the ring where it sits near 70, so each theft represents 200 dollars. “Those who steal them, sell them in several clandestine smelters in the city, for a maximum price of $ 20,” said Galarza. To reduce theft, the project planned for this year is to develop the manhole covers with ductile or nodular iron, for greater safety, because this material is less attractive to criminals, because when trying to be melted, it would have to be cut and it could only be done at very high temperatures and in a special oven that is not yet managed in the city.

“Part of the solution is in improving surveillance in the neighborhoods that are most vulnerable to these attacks on public property. The collaboration of the police will be requested to sanction these crimes in the city, “he said.

Faced with this lack, the siphons and sewers are filled with garbage of all kinds and, subsequently, are covered by the amount of material inside. In this way, they become clogged and do not fulfill their role of evacuating rainwater.

The acrylic concrete covers will be put to the test in peripheral neighborhoods in the capital to check their resistance. In case the tests pass, the changes will begin in the coming months.

ADN puts plastic caps to replace the metal ones