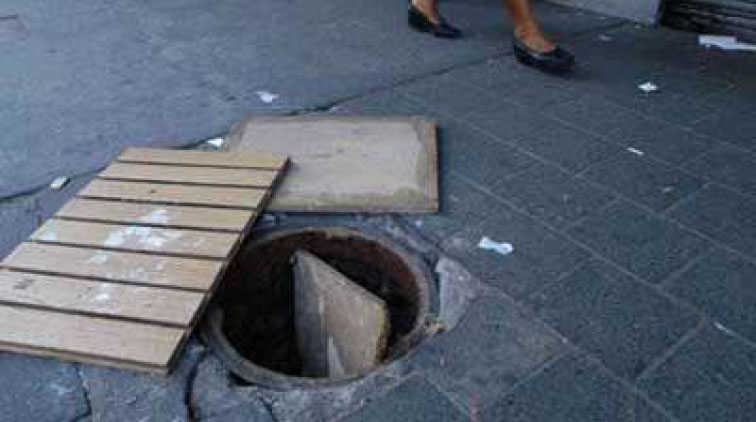 Every day at least one iron lid disappears, which thieves sell per kilo.

The theft of metal sewer covers has become a headache for the Intermunicipal Drinking Water and Sewerage System (SIAPA), as nearly two are stolen daily, so the agency has had to replace them with some more. modern made of polyethylene, which has invested so far just over fourteen million pesos.

In total, of the traditional covers, made of ductile iron, more than 200 have been stolen so far this year, which is assumed that thieves “sell per kilo” in the business of buying and selling scrap or smelters to an approximate price between 40 and 50 pesos each.

The simplest measure to discourage the illicit has been to eliminate the temptation, so the unit works in the replacement of this type of caps by others made of plastic material, which were previously subjected for six months to laboratory and field tests to check their resistance and functionality.

In this last case, they were placed in some busy avenues, where they could verify that they do not dilate too much, as well as that they adhere well to avoid noise with the passing of cars, in addition to not sinking, as it is the case of concrete, explained the Manager of Drinking Water and Sewage of SIAPA, Jorge Monreal Rocha.

The official added that for the time being, material has been purchased to install 500 of these new lids, which together with labor and the acquisition of steel grilles (in the case of storm outlets), has involved an investment of fourteen million pesos.

Other advantages of plastic caps are that they are lighter and cheaper, they cost 1,150 pesos and weigh between fifteen and 20 kilograms each, while those of iron weighing between 60 and 65 kilograms have a unit value of 1,500 pesos.

In addition to that the majority, as additional protection, has a special insurance. Those that have this, are those designed to vent the water if necessary. This brooch does not have the metal, which facilitated theft.

In fact “we have a report that there is a green truck that wanders through certain colonies with people who get off with metal bars, open the covers and take them away,” concluded Monreal Rocha.

Advances the repair of storm drains

To date, SIAPA has repaired more than half of the thousand storm drains and sewers (manholes) that were detected with serious damage to streets and avenues in the metropolitan area of ​​Guadalajara, informed the manager of Potable Water and Sewerage of the Intermunicipal System of Drinking Water and Sewerage, Jorge Monreal Rocha.

Through a dozen subcontracted companies, more than 225 grilles of storm drains have been repaired and a similar number of substitutions have been made of curbs and manhole covers or manholes in different streets and avenues of the metropolitan area.

These jobs have generated complaints from motorists, as some are made during the workday, even during peak hours. In this last line, the operational director of the Department of Roads and Transportation (SVT), Felipe Prado Trejo, indicated that the SIAPA regularly requests support from its agents when it repairs urgently any sewer or storm drain, in order to expedite vehicular traffic, especially when the lane of an avenue is closed.

Regarding the number of urgent repairs that the SIAPA considers on its list, Prado Trejo said he did not have any information about it, but pointed out: “Mil? … I think there are few decomposed or damaged sewers, which can be seen everywhere”. If you know of a sewer that is in poor condition and puts people at risk, or that is constantly clogged, call Siapatel: 3668-2482.
24 hours a day, 365 days a year.